skip to main | skip to sidebar

Let me start by saying that I am doing well now... I had surgery at the be 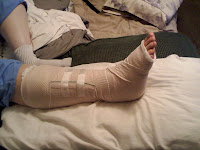 ginning of April on my ankle (see previous post from February). It was a day surgery and I woke up amazingly fast from the anesthesia. I had a horrible night that night. I knew that the leg would swell after surgery but I forgot that they told me to loosen the bandages. I cried so much that night that I thought my DH was going to rush me to the hospital just to get them to knock me out. We called the doctor on call and he told us to take some Motrin in addition to the pain killer that was prescribed. The next morning, the surgeon's nurse called and told me to loosen the bandages and what a difference that made. I was in that wrap and partial cast for one week. 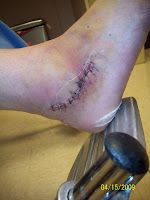 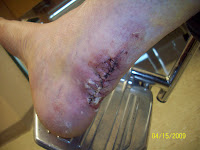 After one week, I went to the doctor and they removed the wrap and partial cast and I got to see my Frankenstein stitches for the first time. It sure felt good to uncover my foot, it was numb and dirty looking. I discovered that you can't do anything when you can put weight on your foot. I could not walk with crutches so my grandmother gave me a walker to use. That was hard to hop around with. I ended having to get a wheelchair to get around when I left the house. That was a funny site. I have a drop off on the porch and had to get my DH to lower me to the ground and then put the walker in front of me so I could hop to the truck to go to the doctor. He then had to load the wheelchair and walker into the truck so I would have it at the other end. 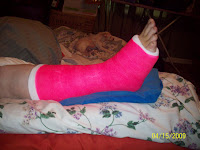 t a real cast (pink) that was supposed to stay on for three weeks. They told me I could shower if I covered my cast with plastic bags so I tried it. I can't stand to be dirty. This cast lasted two days. I got it wet with my first shower because I didn't have the strength to stand up and I slipped and drug my foot across the shower floor ripping the bags. We tried to dry it but I could feel the moisture around the stitches so we had to go back to the doctor and get a new one. 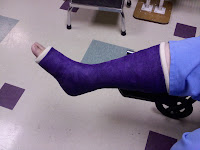 I tried the shower thing again sitting down but kept sliding on the tiny seat in the shower so I gave up showers and took sink bath's and had to get my DH to wash my hair in the kitchen sink. This cast (purple) lasted one week. I felt something in my cast that was putting pressure near my stitches so I called the doctor and they had me come in. They took off the cast and there was nothing there. The only thing they could figure it that the batting wrapped around the foot, shifted and made me think something was in the cast. So I got cast number three... 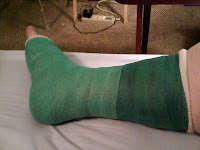 This cast (green) would only stay on for a week, because I had to go back three weeks after surgery to have the Frankenstein stitches removed. They gave me alcohol to wipe my leg down and then put on a new cast (black) that I had to wear for three more weeks. I forgot to take a picture of that cast.
This was not an easy time for me. I had to sleep with my foot elevated on a bunch of cushions and pillows because it swelled a lot. Then it started to itch. I made it through these three weeks.
I got the black cast off and was told that I had to wear a pneumatic boot for four weeks. I could take it off except when I needed to walk. It was like learning to walk all over again. I was weak and tired easily. When you spend three weeks on your back its hard to start over. I had five weeks of physical therapy and that was hard too.
When I was finally released from everything it still took weeks to get my stamina up. I still have swelling in the foot that can occur for one year and it is still numb on one side. I do fine now unless I do a lot of walking.
Posted by Debbie at 7:52 PM

Blog of the Day